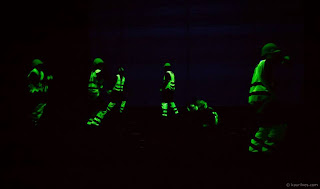 (photo by Kaur Ilves)
March 28th 2012 an anonymous Estonian immigrant was on his way home, from Helsinki to Tallinn. 10 minutes after the departure of the ferry he jumped overboard into freezing sea. The rescue boats and helicopters couldn't find him. He was thought to be dead. Three weeks later he appeared to be alive and returned back home. What happened to him during  those three weeks? This is a mystery that needs to be solved, in order to re-articulate the borders between the East and the West and re-think the capitalist vocabulary imposing the meaning of human life. Keywords: an empty island, an empty summer house, potato chips, a miracle.